Best Danish team and one of the best teams for years Astralis has returned to winning form. After taking down G2 in the finals of ECS Season 5, they bested Team Liquid 3-1 in ESL Pro League Season 7.

Quite a few known esports analysts have predicted that Astralis will take down the NA team 3-1 and that is what we got. de_dust2 as new-old map in pool was expected to bring some new plays and somewhat interesting score. Astralis decided to decline that experience for most users as they demolished Team Liquid 16:1 to take 1-0 lead. How big defeat that was best tell that only 1 player from NA team had more than 10 kills – Keith ‘NAF‘ Markovic who had 12 kills but also 16 deaths. Everyone in Astralis side were in mood as worst player Andreas ‘Xyp9x‘ Højsleth had 12 kills and 7 deaths. Nicolai ‘device‘ Reedtz was absolutely unstoppable with 22-7 and huge 2.26 HLTV 2.0 rating!

Second map was de_nuke. Map that most analysts gave to Team Liquid but it slipped through their fingers after taking both pistol rounds and some very important clutches. Even though Team Liquid lost the map 14:16 they shown that they can play on pair with Astralis. With that said Astralis had huge lead of 2-0 and potentially final map was de_mirage where Team Liquid must win if they want to stay in the finals.

Third map de_mirage stated with both sides were nervous and losing advantages they had exchanging round for round. It was Team Liquid who was first to take control over first half by going 5:2 as T after good comebacks in rounds following Astarlis initial picks. It looks like Team Liquid will secure first half in their advantage but
Astralis decided to mess that up! Nicolai ‘device‘ Reedtz was once again a pivotal player for Danish side who went into second half with 8:6 lead. It looked like Astralis will run away with the map quite easy as they stretched their lead to big 13:7 but Team Liquid still had something to say about that. Excellent team play and trading got Team Liquid back into map and eventually led to 16:14 victory to fight another day. Keith ‘NAF‘ Markovic and Epitacio ‘TACO‘ de Melo were leading the charge with great help from Nick ‘nitr0‘ Cannella who managed to stop multiple attacks of Astralis with AWP.

Team Liquid started strong on de_inferno as T’s taking pistol and following 3 rounds to make a safe lead against Astralis. It looked great for them but Danes decided to make that round somewhat worthy for them as they secured 5 rounds at the end. In second half we’ve seen Astralis setting up a wall Team Liquid failed to break most of the time. Emil ‘Magisk‘ Reif was amazing in the pit where he stopped multiple attacks by NA team who simply didn’t have a solution. 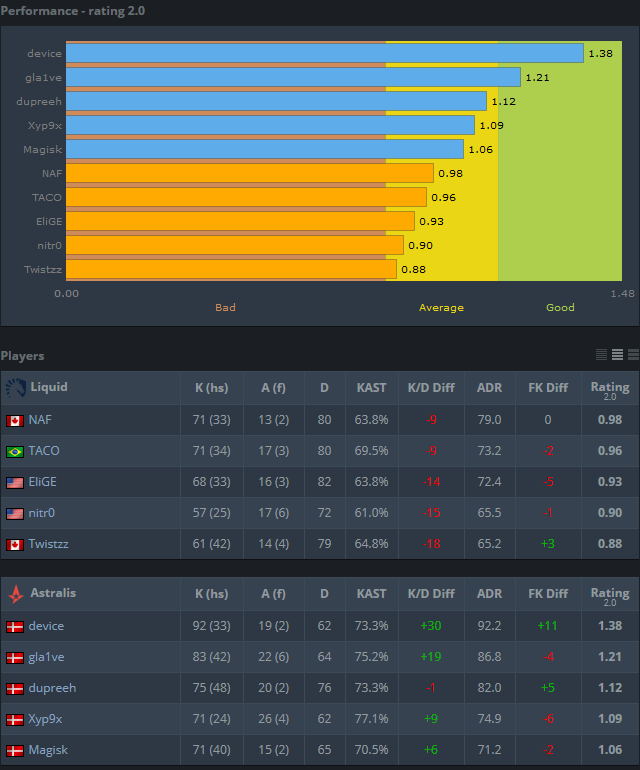