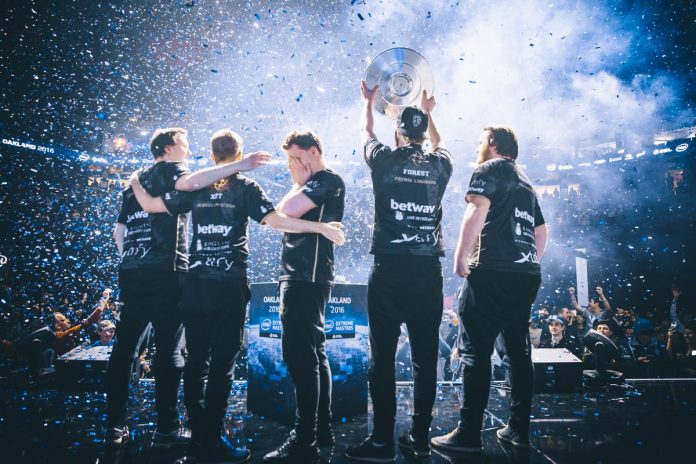 NiP were crowned IEM Oakland champions after beating SK in three maps. After losing Train 4-16, the Ninjas were able to bring it back on Cache, 16-14, and then win the tournament with another 16-14 on Cobblestone.

The only way for NiP to be able to contest the first map, Train, would be to have a good showing on the CT side. With that in mind, the Swedes started off winning the pistol round in a great team effort. NiP instantly received a punch in the face NiP as SKtook the forcebuy with Epitacio “TACO” de Melo opening up the map for Fernando “fer” Alvarenga and Gabriel “FalleN” Toledo to each get a double. While NiP held on early, SK just kept relentlessly beating on the Swedes for an 11-4 half, after which SK were to switch over to the CT side, their strong side.

With two opening USP-S headshots by Marcelo “coldzera” David and a cheeky headshot from Lincoln “fnx” Lau on the popdog ladder, SKquickly got on the way to close out the map. NiP made their first eco scary, planting B and getting into a 2vs2, but the Brazilians were able to eliminate the Swedes and defuse the bomb. It didn’t take long for SK to close out the map, as they expectedly didn’t give up a single round for a 16-4. SK didn’t even break a sweat on Train

The second map, Cache, was NiP’s to take, as the last time the Brazilians played it was months ago at DreamHack Masters Malmö, and it was an absolute disaster. With a fierce Nuke, though, the Brazilians were forced to leave Cache to the Ninjas. The Brazilian team started winning the pistol on the CT and an anti-eco to follow. That would be pretty much it, though, as NiP would then start steamrolling SK for a 7-3 scoreline after ten rounds of play. The Brazilian side made a last effort on the half to take two more rounds, but the Ninjas went into the CT half ahead by a hefty 10-5.

An impressive tap with the USP-S by Patrik “f0rest” Lindberg got instantly traded by TACO as SK took over the B site for a plant. The Swedes, though, swiftly retook the site for an even larger lead. Quickly, though, SK made a match out of it, with two nutty deagle headshots after running through the mid smoke by coldzera, winning the eco. The Brazilians then got five rounds to NiP’s three for a 13-11 scoreline and the Ninjas with a wobbly economy in great part thanks to coldzera’s clutching abilities. After making it 13-13, SK and NiP traded rounds for a tie on the 28th round. On the match point, Richard “Xizt” Landström pulled out the autosniper with which he got the opening and two last frags on B site to close out the map. The final map started with NiP on the terrorist rushing the B site, which they were able to get ahold of and eliminate the CTs with two opening frags by Adam “friberg” Friberg and three by Xizt. SKwon a big first gun round to keep the early game even and preventNiP from running away. The Swedes were able to trade the round, though, pushing SK on an eco.

Once they could buy, SK got their second round on the board, but were once again traded. NiP got a 6-2 lead and kept SK between a rock and a hard place as the Brazilian team struggled with money. The forcebuy worked, though, and a mix of pistols a rifle and a shotgun stopped an A push which the Swedish side had been abusing and got the Brazilian team back in the game. It wouldn’t last long, though, as NiP took double the amount of rounds as SK to close the half 10-5. NiP raised the trophy after winning two thirty round maps

SK gaming made a game of it by taking the pistol round and following it up with the ecos,. NiP were able to get the first buy round buy were traded the following round, and were leading only by two, 11-9, going into an eco with a saved AWP. SK then found their groove racking up a 13-11 lead, but their hot streak was cut short by a triple with the SCAR-20 by Xizt.

With 14-12 on the board for the Brazilians, f0rest pulled a triple out of his bag of tricks defending mid to keep the Ninjas in contention. Not only in contention, the Ninjas were able to get a streak of their own going to get up to match point in the last round of regulation, which the Swedes took in a 16-14 victory to be crowned IEM Oakland champions.