Midlane is famous for its legendary players, plays and champions, and we’re here to cover the latter to help you win games in soloQ.

While Ahri has always been relevant, it came to everyone’s surprise that her recent mini-rework shifted her in the direction of borderline overpowered. Even facing nerfs, she remains the undisputed top pick in midlane, and for good reason. Ahri is a jack of all trades. She brings sustain, mobility, waveclear, damage and of course, her charm. She lacks early game, but makes up for it with an amazingly strong mobility ultimate for roaming. Her mobility and ability to quickly pick off targets with her team is unmatched.

She’s extremely versatile in item building as well, so you can adjust your mythic based on the game. While she can be hard countered by several champions, like Fizz or Yasuo, her overall flexibility lets her be a great pick for soloQ midlane mains. She’s quick and deadly, and looks charming while on the job. 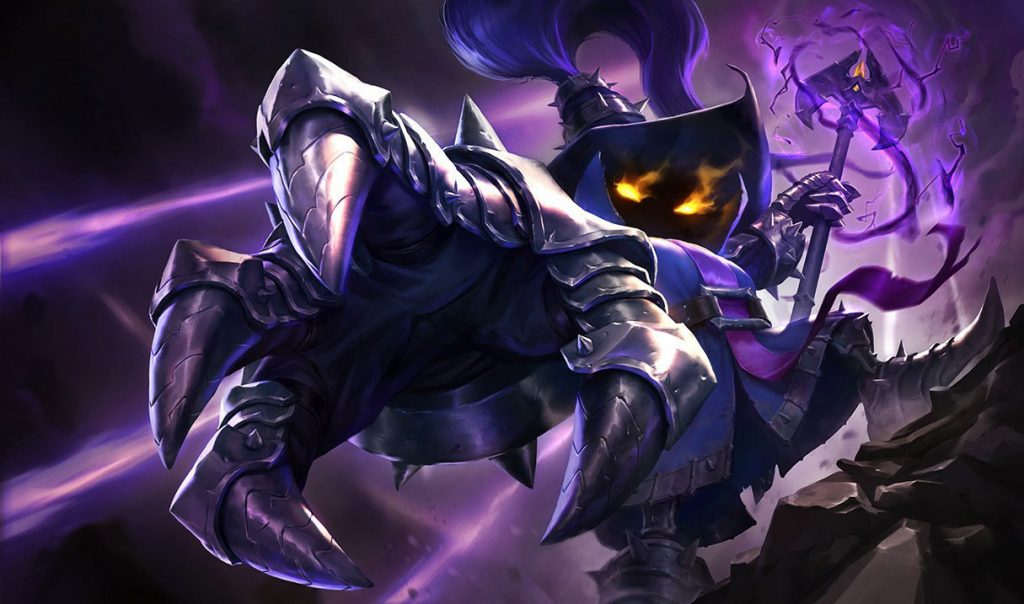 He’s evil. Stop laughing. Veigar has been wreaking havoc on the rift, and for good reason. While he looks and is tiny and vulnerable, his extreme damage output lets him single handedly win fights or even duels, and then win some more the later the game goes. Early game you’re easy to catch. Stay back and cozy, and look to stack up your passive, killing minions with your Q, Baleful Strike. Once you have your cage, you actually become quite difficult to gank, letting you farm up even more.

As soon as your waveclear becomes unstoppable, grab your predator boots and roam to a sidelane, your failsafe combo of pressing R will be sure to surprise anyone in your way. Later in the game, use your cage to zone enemies, but be sure to avoid early game aggressors. Fall behind, and your evil plans will be done for. Also, ban Kassadin, we won’t blame you for it.

Kassadin works in the same league as Malphite up top. They’re both incredible counterpicks that any midlaner should consider having in their champion pool. Pick him into champions with weak early games, especially AP mages, and watch them crumble under your level 16 power spike. In the early game, focus on staying alive and grabbing the farm you can. You will undoubtedly be targeted by junglers, so remember to bring wards and a patient mindset. Look for simple roams where possible, but highly prioritize experience and cs over everything else.

With Kassadin in the game, the game is never truly over. SoloQ tends to bring chaotic games where anything can happen, and that’s where Kassadin can thrive and get in control. Keep your mental and those of your teammates’ cool, and please, for everyone’s sake, don’t blind pick him. AD assassins and bruisers are everywhere, you won’t enjoy laning against those.

Parkouring and instantly killing ADCs has never been so fun, and never been this easy. Talon has one of the best, if not the best, level 2 power spike in the game, and is the king of First Blood. Once you’re able to waveclear reliably, you become a menace simply by walking out of enemy vision.

He benefits from SoloQ being disorganized and chaotic. Roaming towards sidelanes becomes a walk in the park, as the enemy won’t even realize you’re coming until it’s too late. Bring blades and a lot of salt to pour on your tilted enemies’ wounds.

Coming in last but not least, LeBlanc is the queen of deception in the midlane. Winning lane is her forte, having big burst damage and few truly bad matchups. Even when the lane isn’t going your way, you can always run off to a sidelane for very quick kills. Early game, you do struggle with waveclear, so stay ahead of your enemy by auto attacking the wave, and use your advantage to try and chunk your opponent’s health bar. Kill them once, and you’re golden to do it again. Once you’ve created a big enough lead, you’re free to roam around for as long as you like.

When playing in the midgame, try to keep moving around the fog of war. Your highly potent mobility allows you to approach the enemy from different angles, so use this strength and always stay one step ahead of the enemy. It takes some time to learn LeBlanc, but when you do, you’re sure to become your region’s next Faker.

That’s it for midlane. If you ever feel like you’re not gaining ground on the ladder, make sure to try adding one of these champions to your champion pool. Stay cool, stay friendly to your jungler, and bring body bags for your botlane roams. Good luck, summoner.

Most ambitious opening ceremony ever for the Worlds 2022 finals by...