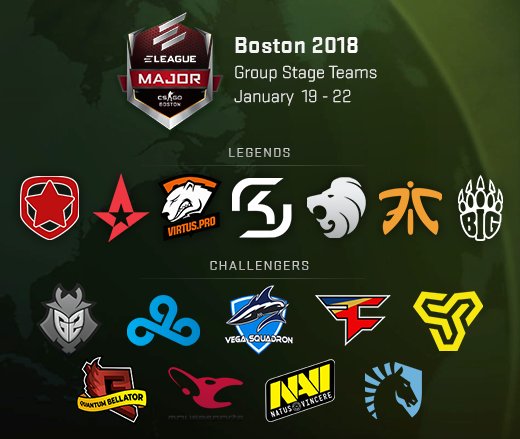 QBF started their event with victory over

Virtus.pro but second round opponent is in far better form than polish side.

Na’Vi on de_nuke so they were clear favorites in this match up. Match was played in series so after initial lead of 2:0 for

QBF gambit returned with 3 consecutive round on their T side, just to have

QBF take next 5 as CT. Whole match was ran in series of rounds taken by one of the teams, but it only led to overtime. There

QBF managed to take the win with “easy” 4-1 score to secure 2:0 in swiss format for them and now they only need one more game to qualify for playoffs and secure Legends status! What a run for Khazak team!

Gambit is on 1:1 score and they are in need of two more wins in order to advance.

Cloud9
As one would expect from two very promising teams, we’ve had a blast watching this match. de_cobble is expectedly T sided map and this game showed us nothing less. Amazing attacking side from

Space Soldiers showed us 11:4 half time as T, with only hand full of rounds taken “easy” by either side. Unexpected plays and amazing baits were part of pretty much every round but

Space Soldiers were somehow on top of it most of the time. Second half started the same way for

Space Soldiers managed to defend 3 on their own. However

Space Soldiers was a somewhat better side and managed to close out the game with 16:13. Huge win for turkish team as first timers on Major event. They now stand on 1:1, which can be considered very positive as they played

SK in first round.

Cloud 9 is on 0:2 and they are in big problem as next match can decide their faith

Vega Squadron. As one would expect from #2 teams in the world

FaZe took this match seriously and prepared for de_train on time.

FaZe started as CT and completely destroyed attacking plans of

Vega Squadron who only managed to take 3 rounds as T. When sides turned

Faze continued as expected and with 4:0 finished the game without any worries or problems.

G2 started their match really strong as they won 8 CT rounds consecutively on de_inferno , before

Liquid managed to get on scoreboard with ace from Nick “nitr0” Cannella.

Liquid started somewhat better – making run of 5-1 – and it looked like we could have a close game in the end. 3 quick rounds from

G2 closed any hopes as map is finished with score 16:8.

Mousesports
This definitely was match of the day as both teams showed good play in first round.

Mousesports can be this started and ended as really good match. Match was played on de_mirage and it was played in short series of 2-3 rounds most of the time for one team before other makes same thing for them.

SK was playing T side and after initial 3 rounds, series swap started but it ended 7:8 for

Mousesports in the end. Not really best defense from german side but having

SK as opponent you will gladly take it at any point. Swapping sides brought us same type of play where players were making great shots and mini series on both sides but

SK used as much as they could. Match ended with score 16:12 but at multiple points game could have gone in different way.

Virtus.pro as expected failed to deliver. They haven’t showed any class for last who knows how long and today was no different.

fnatic simply stomped them on both sides. de_inferno where

fnatic is attacking shows completely non-working polish side as swedes run them over with easy 10:5. That even looked “ok” for

Virtus.Pro but changing sides showed how bad they really are at the moment.

fnatic started strong as CT, making 5 rounds in a row and getting to match point.

Virtus.Pro managed to deny them first match point but in just next round

fnatic finished one really one sided game for total score of 6:16.

Virtus.Pro is now on 0:2 and they are on verge of being eliminated while

fnatic managed to get to safe part of the board with 1:1.

BIG easier than expected. It looked like it started well for

Natus Vincere completely destroyed them afterwards and without an issue closed the game with 1:16!

BIG is now on 0:2 and they are on verge of dropping out, while

Natus Vincere managed to jump back and to get 1:1 score.

North
Danish derby all around! Two best danish teams played on de_train and saw one of the closes game of the day.

North started as T and after winning pistol round they managed to secure next two. However

Astralis didn’t give up and they defended two next rounds with defuses but then game starts to play out one round for each team. Finally

North manages to secure two rounds in a row and starts huge series of 6 rounds in a row to finish the half with 4:11 in their favor. In seconds half T side continues to dominate the map, but this time it’s

Astralis who is gaining advantage. If we thought that

North had good side we were wrong.

Astralis plays absolutelly dominant T side where they take needed 12 rounds – without taking pistol round – to secure themselves a win 16:14.

Astralis is now 1:1 while

North is on verge of elimination with score 0:2.