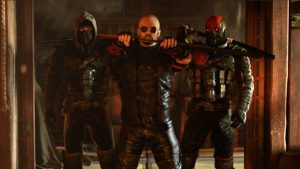 Shadow Warrior 2 is the sequel to Flying Wild Hog’s somewhat weird and somewhat awesome first-person shooter game and follows the misadventures of former corporate shogun Lo Wang. Now he is a seclusive mercenary and once again he must use his arsenal of guns, swords, magics and wits to strike down the demonic legions attacking his world.

Shadow Warrior 2 picks up five years after the events of the first Shadow Warrior game and without spoiling the first game humans and demons are living side by side and when a routine mission goes wrong Lo Wang is dragged into a conflict between his nemesis Orochi Zilla and the demonic forces who have become unsettled in their new world. The whole game can be played in co-op with a “four-player typhoon of destruction” and each player gets to customize his own warrior.

The landscapes and paths of Shadow Warrior 2 will be procedurally generated to make sure that the game always feels fresh, and because of some interdimensional hernia.

Gamescom 2022 Schedule: Shows & Reveals You Can Watch This Year