Two powerhouses Astralis and NaVi have played a hard match against each other on first day of FACEIT London Major.

First Half:
NaVi started strong after taking pistol as s1mple made 3k to give it’s team important advantage for next two rounds. However Astralis had other plans as they turned result around as they won next 7 out of 8 rounds to get lead of 7:4.

NaVi carried by s1mple and Electronic managed to get their CT side under control and finish half with lead 8:7.

Second Half:
Astralis won second pistol round as they battled their was over quad to A site and secured the plant. Ioann Edward Sukhariev wasn’t able to clutch 1v2 as Peter Dupreeh Rasmussen made a quick work of him. Danes were better team in second half as they won next 6 out of 7 rounds and gained a big lead. 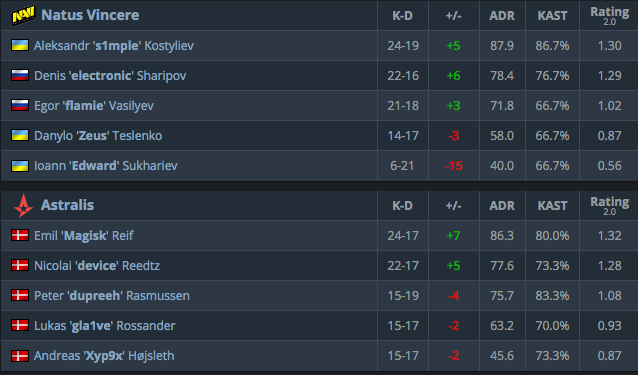 Fnatic edges out Vega 16:14 on Inferno