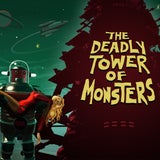 Green screen! Lasers! And a tower full of deadly monsters! When Dick Starspeed crash-lands his rocket on the planet of Gravoria, he’ll have to fight through dinosaurs, nukular ants, and other skilled, costumed stuntmen to make it up the deadly tower of monsters.

Fire up your ray guns, crystal swords, and laser whips, and get ready for thrills and chills of The Deadly Tower of Monsters, a shoot-em-up action game inspired by classic sci-fi adventure serials! Be amazed by the state-of-the-art effects, including stop-motion, rotoscope, image compositing, and even some elaborate costumes covered in real fur! With three incredible movie stars playing out decidedly B-level sci-fi exploits, Dick Starspeed, Scarlet Nova, and Robot will have you ready to jump off the side of the tower—right into adventure! Gather your courage and prepare to face off against the more than half-a-hundred monsters that will try and stop your ascension up THE DEADLY TOWER OF MONSTERS!